No, this isn't a tender love ballad from Casper the friendly ghost. It's a talentless dance tune from a bunch of bikini girls who can't sing. This has to be one of the worst club hits I've heard, and I bought two Dance Mix USA CDs. And how about the video? It's got the requisite beach volleyball shots and poolside antics, inspired I'm sure by "The Grind," which has inspired many great works of art. In fact, wasn't Handel's Messiah loosely based on the C+C Music Factory / Kris Kross episode of "The Grind"?

For someone like me who goes out of his way to lampoon critics who make really bad word plays (e.g. Gene Shalit, whose true talent for movie reviewing is revealed when you take the "al" out of his last name) by thinking of the worst possible ones I can, a band named Garbage offers limitless opportunities. That's why it sucks that I like them so much. This almost fits with the theme of the song, bad things being good, pain being pleasurable (in a non-sexual way), etc.

The video itself showcases the charismatic lead singer, Scottish Shirley Manson, who shows off bright blue and red mini-dresses. It adds brightness to an already colorful video, but there's also a dark edge. Oddly enough, it's the dark edge that comes off optimistic and the bright edge that exudes pessimism and anger. The bright edge is dark and the dark edge is bright, further perpetuating the duality... I've been writing college papers too long, I've got this intellectual b.s. thing down pat.

I'm still in love with Mariah after all this time. Who cares if she's married to some 55-year-old record executive, he'll probably die before I'm 30, by which time I'll be rich and world-renowned and our storybook romance will finally commence. Who says I can't separate fantasy from reality? Certainly not this pink fairy on my shoulder...

Five sentences later, I've established my ongoing adolescent crush on Mariah Carey, but still haven't explained why I only gave this video one-and-a-half stars. The thing is, Mariah just doesn't throw her heart and soul into making decent videos for teenage boys to drool over like Janet or Madonna. For every lusterpiece like "Dreamlover" or "Fantasy," there's a so-so video like "One Sweet Day," "Hero" or this bland live performance from last year's NBC special.

In addition, "Forever" isn't even a good single choice. I own the Daydream album, I've listened to it countless times, I would have gone with "Underneath the Stars," "Melt Away" or her remake of Journey's "Open Arms" before releasing this generic ballad to radio. But then I'm not a record exec and I'm not 55, so what do I know?
Just let me leave you with this prediction -- "Forever" will not last forever. They won't even play it on radios after next year and it probably won't end up on Mariah's greatest hits collection. That prognistication is probably a million times more likely than the future existence of Mariah Hicks. 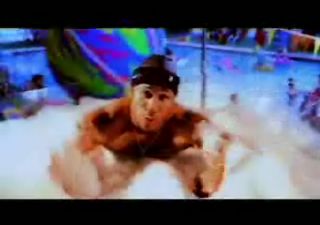 Enjoying his best level of success ever in what is his third comeback (and I know I shouldn't call it a comeback -- he's been here for years), L.L. proves that if it ain't broke, don't fix it. His past four singles have all been sex-oriented, and "Ain't Nobody" ain't no exception. Sampling the Chaka Khan classic, this version appears on the Beavis and Butt-head Do America.
His past four videos have all been three-star features -- again, no exception. This time, L.L. has an Artic pool party in the dead of winter. It's indoors, of course, so all the women sport bikinis, except for the unidentified female who sings the chorus. The celebrity guests (ha!) include MTV's Doctor Dre and Ed Lover and a bunch of helmeted snow mobile riders. I asked L.L. who those people were and all he said was "ain't nobody." Funny man, that L.L. 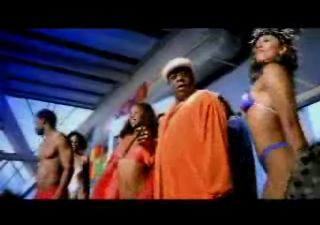 How do I hate thee? Let me count the crows... These guys have gotten on my nerves since "Mr. Jones" back in 1994. Their follow-up videos are no better, this one in particular. The dreadlocked singer's still flailing around uncontrollably and their songs still suck. "Angels" is better than the whiny August and Everything After hits, but not that big an improvement. This video is boring performance stuff that has the Crows playing to a packed audience. So it's a fantasy video...

You know what? Oasis sucks. That they claim to be a second incarnation of the Beatles makes them seem that much less talented by comparison. Liam and Noel Gallagher are no Lennon and McCartney and their claims that their album represents a cross between Revolver and the white album are met by nothing but laughs from most serious music fans, who know Oasis couldn't even approach the worst Beatles album, Beatles For Sale.

"Don't Look Back," the third single from What's the Story, Morning Glory? is about as good as the other two. With their overinflated egos and whiny singing, either you like these guys or you hate them. And it's important that I make it clear early on in the countdown that I don't like Oasis. The video has Oasis playing in front of somebody's house. If it was mine, I'd unleash the hounds, but then again I'm not their #1 fan, or their #1 million fan, for that matter. 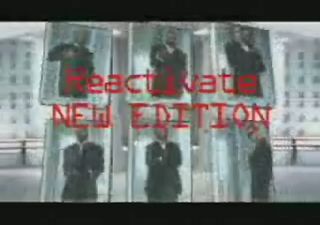 This, as the MTV title card informs us, is the first video from a reunited New Edition, who are trying their damndest to come off cool for a new generation of music-buying kids. Take it from this kid who buys a lot of music -- they don't. The tailored suits and rubber pants (safe threads) just don't work, but neither does the reunion idea in the first place. 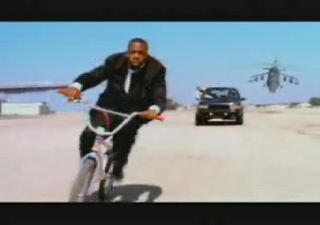 This video begins with some nervous CIA employees deciding to "reactivate" New Edition. Apparently, they were frozen in Area 51 with Walt Disney and the captured aliens. I hope the government wasn't involved in the New Edition reunion. If I knew taxpayer dollars were funding music like this, I'd have no recourse but to move to Canada. 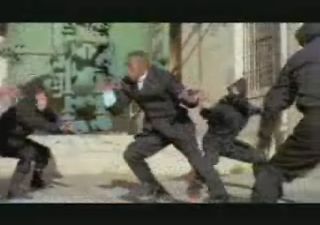 "Hit Me Off" is better than "I'm Still in Love With You" because it's a generic R+B dance tune rather than a generic R+B ballad. The video is better too, mainly involving the reactivated New Edition singing from a basement hallway in the CIA building. It's still nothing worth paying money for. My advice to New Edition -- cash those checks quick before they bounce. 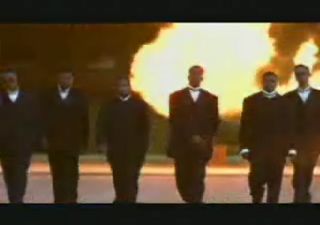 I've never liked Hootie and the Blowfish's mush rock (I'm of the opinion that, talent-wise, they blow fish), but "Sad Caper" is their best video, mainly because Darius Rucker and the boys are hardly in it. And, what can I say, it's not as much fun to hate a band when they're not selling anymore.
"Sad Caper" is another entry in the popular Las Vegas genre of music videos that showcase flashy casinos and luxury hotels (no Nas video would be complete without them). This video follows one man who loses it all, walks around in a daze, wakes up in a strange hotel room, gets a ride back to the casino from a marching band (Hootie and the Blowfish in cognito) and wins a bunch of money. But the moral of the story is -- even with all the money he could ever want, he still has no desire to buy the Fairweather Johnson album.

Soundgarden enters Rage Against the Machine territory here by trying their hands at a little social commentary. Cornell, looking a little too much like Brad Pitt, is bound to a chair, forced to watch images flashing on the screen. Each is accompanied by a subtitle, such as "God," "Country," and "Happiness." They even have a picture of Hitler titled "Enemy." I'd flash a picture of Soundgarden up and call it "Mediocre." These guys used to kick so much ass; what happened?

I'd swear these girls broke up, especially when one of them released an ill-fated solo album early last year, but here they are again, four attractive black women singing the theme song from a movie about four attractive black women, Set It Off. (Okay, so Queen Latifah's not that attractive; just go with me on this one.)
The "Don't Let Go" video has a look almost identical to "Whatta Man," another video of theirs, with them standing around a crowd of men, singing their overly made-up heads off while Set It Off clips are liberally dispersed. "Don't Let Go" is a pretty generic ballad that doesn't rank with classic En Vogue tunes like "Free Your Mind" or "My Lovin'," but it was still a welcome comeback, even if it was just a soundtrack song and not an actual album.

We think civilization is getting more sophisticated, but every year there are a few of these saccharine pop songs that slip by. There are always a few one-hit wonders we'll deny ever liking in a year or two, most of which are blond-haired, breathy-voiced women. 1986 had Stacey Q, now 1996 gives us Donna Lewis, who looks like Crystal Bernard from "Wings" and sings like Little Orphan Annie.
The video is passable, with Little Orphan Lewis all alone in a room with shoes on her hands and a constantly twisting camera that steals the very equilibrium from your body. (Don't attempt standing up when this one's on.) She also tries to fool the world into thinking she can play the piano, when we all know it's her amazing vocal prowess we're drawn to. Why, she's got almost a two-octave range!
Adult-contemporary crossover hits were big in 1996. That this VH1 ditty actually popped up on the MTV countdown testifies to that. It almost gives Phil Collins and John Mellencamp something to shoot for in 1997.
To Videos #70-61
Back to the eMpTyV Homepage